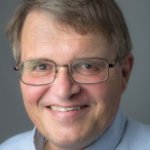 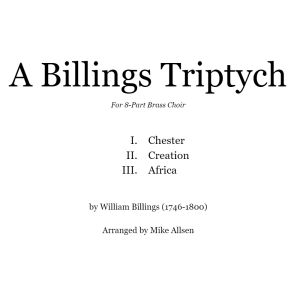 William Billings (1746-1800) was North America’s first great choral composer. He spent most of his life in Boston, working at various times as a tanner or as minor civic official, and occasionally as a church musician. Billings seems to have had little formal music training, but when he was just 22, he also set himself up as an itinerant singing-master, teaching “singing-schools,” where children and adults could learn the rudiments of musical notation and solfege. To feed the market he and other singing-masters had helped to create, Billings published six collections of music, mostly for SATB voices, The first of these, The New England Psalm-Singer (1770) featured a frontispiece engraved by his friend Paul Revere. Billings was fairly prosperous by 1780s, but his good fortune faded in the 1790s. His final collection of music, The Continental Harmony of 1794, was published for his benefit by a group of Boston friends. Billings died destitute in 1800.

Billings composed some 340 pieces, mostly collected in his printed editions. This music has a rough-edged and sturdy beauty that is distinctly different from anything in contemporary Europe. The vast majority of Billings’s works were hymns or “psalm tunes.” He was particularly attracted to the great English hymn-writer Isaac Watts (1674-1748), though Billings himself wrote verses for many of his hymns. One of the most famous Billings “psalm tunes,” Chester is not a Christian hymn, but rather a patriotic song of defiance directed against the British. Billings spent nearly all of the Revolutionary War in Boston and made no secret of his patriot sentiments. Chester was first published in 1770, but when he republished it in his The Singing-Master’s Assistant during the height of the war in 1778, Billings added a verse calling out the “infernal league” of the leading British generals Howe, Burgoyne, Clinton, Prescot and Cornwallis. Many brass-players will know Chester from the finale of William Schuman’s 1957 band piece A New England Triptych. Billings also composed over 50 “fuging-tunes”—a genre that usually included a short introduction and a repeated contrapuntal section. (These fuging sections usually begin with imitation, but they are otherwise not at all like classical fugues written in Europe at the time.) The fuging-tune Creation is one of his later works, published in The Continental Harmony of 1794, and experiments with the form. It sets two verses of the Watts hymn “When I With Pleasing Wonder Stand” though final line of verse 1 is repeated in a striking phrase that suddenly moves twice as fast (m.15). The fuging section begins in m.30, and rather than the usual exact repeat, Billing writes an entirely new and more elaborate second section beginning at m.44. Billings first published the simple but beautiful Africa in 1770, and published a revised version in 1778; the later version appearing with the Isaac Watts hymn “Now Shall My Inward Joys Arise.” I first arranged Africa in 1995, for the Glenwood Moravian Trombone Choir (Madison, WI), and I edited it for this publication. Phrasing and articulations marked here reflect the original vocal texts. Africa has long been a favorite of the Glenwood group. Chester and Creation were arranged in 2022. 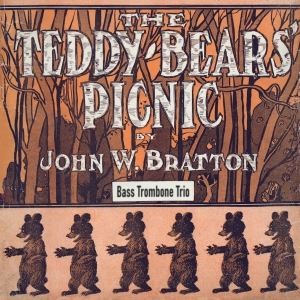 This novelty piece for three bass trombones is a silly version of a children’s song I fondly remember my mom singing to me when I was little. It was written in 2019 for the Glenwood Moravian Trombone Choir’s (Madison, WI) Ice Cream Social—always an enjoyable chance for the group to play decidedly “non-church” music. It was written as a feature for the two other bass trombonists in the group—Isaac Weber and Mike Wathen—and me. 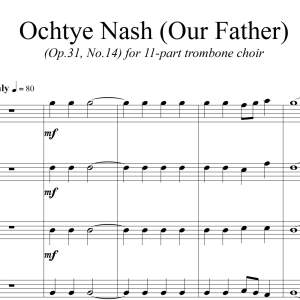 Rachmaninoff composed his Liturgiya svyatovo Ioanna Zlatousta (Liturgy of St John Chrysostom), Op.31 in 1910. The Liturgy is a 20-movement setting of the primary worship service of the Russian Orthodox Church, sung in the Old Church Slavonic by unaccompanied chorus. This arrangement was prepared in 2018, for the January 2019 UW-Whitewater Trombone Day. Otchye Nash is an antiphonal setting of the Lord’s Prayer. Parts 1-4 are soloists.

This work should be performed legato throughout. 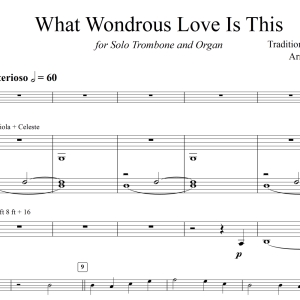 The text of this well-known song first appeared in the early 19th century, and it was published as a “shape note” hymn by William Walker in his 1840 edition of The Southern Harmony. The melody is drawn from an English ballad that was 150 years old by then. This version was sketched in June 1995 and completed in February 1996. It was first played on March 10, 1996 at Glenwood Moravian Community Church (Madison, WI), by organist Richard Benson and me. It was revised slightly in 2022 for this edition. What Wondrous Love Is This is dedicated to the memory of my grandmother, Thelma Allsen.

Browning My Dear - for Brass Quintet

The English organist, singer, and composer Clement Woodcock spent most of his career at Canterbury Cathedral, and, after 1570, at Chichester Cathedral.  His only surviving works are five pieces for viol consort, including the fine Browning My Dear. Browning was one of several melodies that Elizabethan composers used as the basis for instrumental works.  The form of his Browning My Dear is simple but effective: the eight-measure Browning tune is always present, migrating from line to line, as the other parts weave increasingly elaborate counterpoint around it. In performing this, the ensemble should take care that the Browning melody (marked mf), is always clearly audible. This arrangement was written in 1990 for the Glenwood Moravian Trombone Choir (Madison, WI), and revised in 2022.

Lobe den Herrn - “Praise to the Lord, the Almighty” - for Brass Quintet 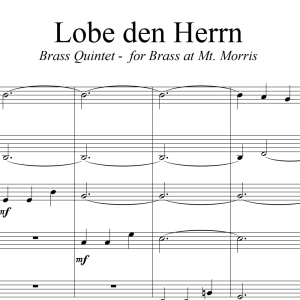 This joyous hymn tune first appeared in Johann Crüger’s Lutheran hymnal Praxis pietatis melica (1668). It is most often associated today with the text “Praise to the Lord, the Almighty.” This arrangement was created in 1992 for Brass at Mt. Morris, an annual retreat for brass players that I led for several years at the Moravian Camp in central Wisconsin. It is set up as a four-verse hymn accompaniment with introduction, but also stands on its own as an independent piece.

Lobe den Herrn - “Praise to the Lord, the Almighty” - for Brass Quartet 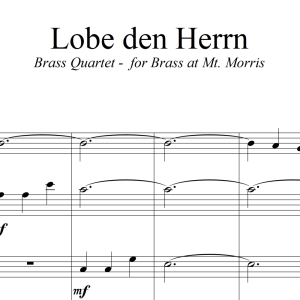 This joyous hymn tune first appeared in Johann Crüger’s Lutheran hymnal Praxis pietatis melica (1668). It is most often associated today with the text “Praise to the Lord, the Almighty.” This arrangement was created in 1992 for Brass at Mt. Morris, an annual retreat for brass players that I led for several years at the Moravian Camp in central Wisconsin. It is set up as a four-verse hymn accompaniment with introduction, but also stands on its own as an independent piece.