Browning My Dear - for Brass Quintet 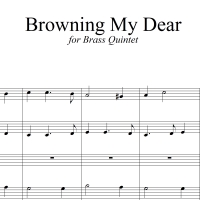 The English organist, singer, and composer Clement Woodcock spent most of his career at Canterbury Cathedral, and, after 1570, at Chichester Cathedral.  His only surviving works are five pieces for viol consort, including the fine Browning My Dear. Browning was one of several melodies that Elizabethan composers used as the basis for instrumental works.  The form of his Browning My Dear is simple but effective: the eight-measure Browning tune is always present, migrating from line to line, as the other parts weave increasingly elaborate counterpoint around it. In performing this, the ensemble should take care that the Browning melody (marked mf), is always clearly audible. This arrangement was written in 1990 for the Glenwood Moravian Trombone Choir (Madison, WI), and revised in 2022.