My Little Drum - from "A Charlie Brown Christmas" - for Wind Quintet 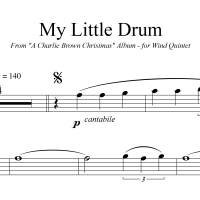 Vince Guaraldi’s unique flavor of “Little Drummer Boy” as recorded on the timeless album “A Charlie Brown Christmas” is available here for Wind Quintet. The form and key of the original recording is adhered to. A listen to the original recording would likely be helpful in internalizing the necessary Latin style. While this piece features a fair number of jazz-influenced harmonies, it remains in straight time throughout so no young players would need to learn how to swing.

Notes: Though it may feel a bit tedious, the children’s voices from the original recording are rendered fully in the Horn part. Besides the bassoonist (who gets to play a number of interesting bass lines), all other players get a chance with either the melody or the solo piano part which gets passed around between the various players, solo at times or in harmony at others. A lower octave option is provided for one particularly high range section for the hornist.

Performance Options: At the end of the original recording there is a fade out at the end of the coda. This arrangement captures a bit of the light improvisatory nature of the recording’s playout with an open repeat. This may be a good opportunity to allow a flutist with some improvisation skills to open up for a few moments at the end.

This would be a great addition to the holiday book for a Wind Quintet with advancing players who have good dexterity on their instruments, but will still remain accessible for players and audience alike.