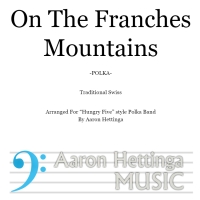 While the title may seem unfamiliar, your audience will light up upon reaching the TRIO when they realize that you’re playing the yodeling theme music from The Price Is Right’s “Cliff Hangers” game! This traditional swiss tune is presented here in an arrangement for the instrumentation of Alford’s “Hungry Five” series of Polka band books.

Each of the 5 parts receives a moment or two to shine, either to take a run at the melody, counter lines, or other figures of interest. The tuba part is mostly in its straightforward support roles, but there are some small technical challenges throughout the rest of the ensemble that will reward advancing players as well as audiences for your German band.

As a performance option, you may want to consider doing a complete D.C. al Fine to extend the performance time if a single pass doesn’t seem enough.

Ready to go for your Oktoberfest gig!