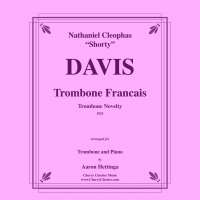 Davis' Trombone Family of compositions consists of 5 known pieces written for concert band between 1916 and 1921, of which Trombone Français (1921) was the last, written in tribute of his overseas service during WWI.