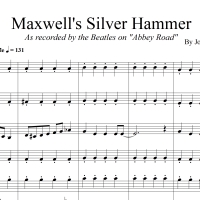 An enjoyable romp from the Beatles’ Abbey Road album shows up here for 5 brass. The form and character of the original recording is generally fairly closely followed. This arrangement is set ½ step higher than the original recording for better accessibility, especially for players not as comfortable with the key of D. Besides the Tuba part (which has some fun twists and turns), every other instrument gets a chance to play the melody for an entire verse or chorus to keep things interesting for all.

Performance options: The first and second verses are fairly identical. Since the lyrics of this song tell a story, it didn’t feel right to eliminate anything from the form. So, for variety’s sake, a different player is featured for each verse. If desiring a shorter play duration, a choice can be made to either feature the F Horn player or the Trombone player (or alternating between them) on the opening section before heading straight into the second ending.