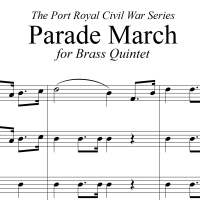 Composer Claudio S. Grafulla (1810-1880) was bandmaster for New York’s 7th Regimental band and became one of the key contributors of pieces for the Port Royal Band Books used during the American Civil War.

His “Parade March or Troop” composition, originally #13 in the Port Royal Band Books, is presented here in an arrangement for Brass Quintet. All of the parts are relatively accessible to players of even moderate ability, though the 1st trumpet part spends some time in a higher tessitura with little opportunity for rest which is why some additional transpositions are provided in this package.

Performance notes: For all entries in the Port Royal Civil War Brass Quintet series, it’s recommended to utilize instruments such as Cornets and Euphonium in place of the Trumpet and Trombone parts to more faithfully emulate the sounds of the conical-bore instruments of the period. Extra sets of 1st Trumpet parts are included, transposed for use with Eb Tpt or Bb Piccolo Tpt instead if desired.

These arrangements are a great opportunity to incorporate music from the American Civil War era into your Brass Quintet’s repertoire.