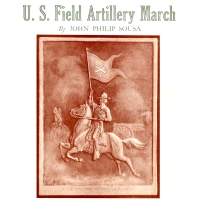 The official U.S. Army song, commonly known as “The Caissons Go Rolling Along” or “The Army Goes Rolling Along,” predates John Philip Sousa’s version by several years. In 1917, Sousa composed “The U.S. Field Artillery March” containing the Caisson Song’s melody as the basis for the march’s TRIO section.

This arrangement makes use of Sousa’s introduction, then remains faithful to his harmonic treatment and the flavors of the melody and accompaniments throughout. While each of the four parts do feature some small technical requirements, they remain at an intermediate level where even less-experienced players should be able to pull them off.

While originally scored for 2 Trumpets and 2 Trombones, the bottom voice will work well on Tuba. Horn in F parts are included to substitute for Trumpet 2 or Trombone if needed.

This arrangement is a great vehicle to share some patriotic flair on your program when four brasses are available!