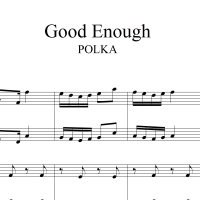 “Good Enough” Polka (originally published in 1874) is an example of Davis’ standard composition form used throughout most of this collection.

This downloadable PDF package contains a full score and a set of folio-sized parts that are ready to go for your German band's Oktoberfest gig!