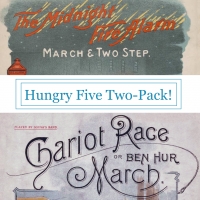 Edward Taylor Paull (1858-1924) was an American composer of marches and rags who was successful in producing a large number of circus marches in the late 1800’s/early 1900’s.. The “Ben Hur Chariot Race March” was the first publication he released in 1894. He also arranged Harry J. Lincon's hit, "Midnight Fire Alarm."

These arrangements have been prepared for the instrumentation of Alford’s “Hungry Five” polka band books and serve as a fine addendum to those familiar pieces. While the clarinet parts tend to be the most active, they often feature diatonic scalar patterns that remain accessible to most intermediate-level players. The trombone part here is more active than many other arrangements for this kind of ensemble and could also be handled by Euphonium if desired. Again, it’s mostly short diatonic 16th note bursts. At the risk of sounding sloppy, it may be better to take the tempo a little lesser than a circus march tempo to accommodate. Besides, if playing this piece for Polka dancing, it would be best to take this at a more danceable tempo anyway.

This downloadable PDF package contains 2 compelte packges of full scores and a sets of parts for "Midnight Fire Alarm" and “Ben Hur Chariot Race March” that are ready to go for adding some extra variety to your German Band’s Oktoberfest gig!