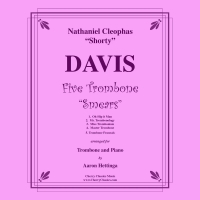 Davis' Trombone Family of compositions consists of 5 known pieces written for concert band between 1916 and 1921. All five of these works are pacakged here for Trombone and Piano: