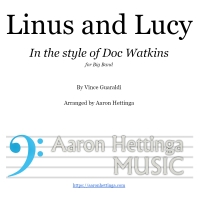 The timeless sounds of the Vince Guaraldi Trio from the “Charlie Brown Christmas” 1960’s television special was expanded to an exciting rendition recorded by the Doc Watkins big band. This arrangement captures the spirit of that recording and observes the original key of both recordings.

This is an advanced level arrangement where solid high brass ranges are needed. The opening piano part is faithful to the original Guaraldi version, then opens up into latin-flavored open solos section where Trumpet and Trombone soloists can stretch out for a little while. The rhythm section parts are all fully notated other than the solo section, where the initial 2-chord changes of the groove is written out and can be directly repeated thereafter.

There is an open vamp after the trombone solo to allow for an extended percussion feature, yet this can be cut and move directly into the ending instead.

A great way to add this holiday standard onto your program!

Published in Big Band
Tagged under

More in this category: « The Green Hornet Theme - Trumpet Feature in the style of Al Hirt - Full Big Band and opt Strings
back to top
Copyright © 2007 - 2023 Aaron Hettinga Music