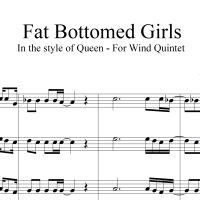 This fun classic rock anthem from Queen is presented here for Wind Quintet. The form of the original recording is closely followed but does not include the extended guitar solo playout, skipping ahead to the last three punctuated ending hits. This arrangement is one whole step lower than the record.

Flexibility: This arrangement includes an optional (but encouraged) drum kit part. While the chart is constructed that it will work just fine without it, having a drummer on board will kick this one up a notch.

Performance options: As noted, the form of the original is mostly followed with a few “2nd time only” cues for variety, this can also be streamlined if so desired. The repeated first/second verse section near the start could jump ahead to the second ending to save time. Also, rather than following the transition back to the D.S., a group alternatively could jump straight to the coda having already covered the bulk of the song.

Also available for Brass or Clarinet or Saxophone Quintets