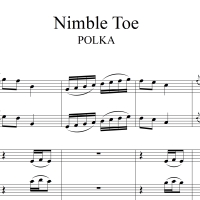 “Nimble Toe” Polka (originally published in 1874) passes the melodic and accompaniment elements around the ensemble for a bit of variety for the players.

This downloadable PDF package contains a full score and a set of folio-sized parts that are ready to go for your German band's Oktoberfest gig!